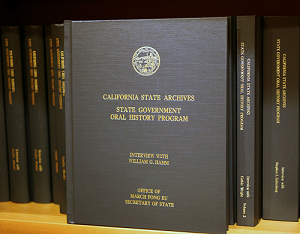 Since 1986, the California State Archives has administered a legislatively established oral history program that has, to date, completed over 200 interviews. This systematic and disciplined effort to record, preserve, and make interviews available supplements the historical records in the Archives and provides researchers with a broader and more complete picture of California government than can be gleaned from documents alone.

Interviews are conducted with people who have had significant roles in California state government: former members of the legislature, constitutional officers, agency and department heads, and those who have shaped public policy or have been identified as being influential in political and public developments at the statewide level. The selection process is on a non–partisan basis, with the goal of illuminating key aspects of California government history. The interviews capture information that might otherwise be lost and prevents "corporate amnesia." The interviews also enhance the historical understanding of legislative and executive processes and policy–making in California by capturing the personal insights of these men and women.

While the program is administered centrally through the State Archives where professional staff analyze gaps in the historical record, set interview priorities and standards, and preserve tapes and transcripts, the interviews are carried out through contracts with oral history programs at several participating universities. Interviewers adhere to professional oral history principles, standards, and ethical guidelines. They do meticulous background research, identify key questions and areas of interest, conduct the interviews, and prepare accurate interview transcriptions that are reviewed and approved by the subject. The tape recordings and finished transcripts are deposited at the State Archives where they are open to research by the public.

Transcripts are available via the alphabetized list on this web page, or through a keyword search on Minerva. Those who prefer to listen to the audio version should navigate to Minerva.

If you have questions regarding the Oral History Program, please contact ArchivesWeb@sos.ca.gov.

Interview summaries are arranged alphabetically by surname. Clicking on the letter will take you to the surname page. If a transcript of an interview is available, the summary will have a link to a downloadable PDF file.

Ducheny’s interview begins with a look at her childhood in Orange County in the 1950s, attending Pomona College and, later, law school. She also discusses her time as a labor and immigration attorney, her service in the Assembly and Senate, experiences with other legislators, the impact of term limits and legislative accomplishments.

Beilenson talks about his childhood and family background as well as his college career. He discusses his time in a law practice and his developing interest in politics. He outlines his state assembly, state senate, and House of Representatives service and comments on the differences in each organization. Beilenson speaks about his legislation regarding abortion and campaign finance reform, his campaigns, and his committee work. He also comments on the governors and presidents he worked with and their different styles.

Van de Kamp discusses his family background and education, his work with the U.S. Attorney's Office, and running for Congress against Barry Goldwater. He talks about his selection as the first Los Angeles Federal Public Defender and that office. He also relates information about the cases and programs of the Los Angeles District Attorney's office during his time as DA. He speaks of campaigning for the office of California Attorney General and that office's organization, enforcement, and other programs. He focuses on the initiative process and working with the legislature on bills as the Attorney General. He also talks about his unsuccessful campaign for governor and his post–Attorney General activities and career.