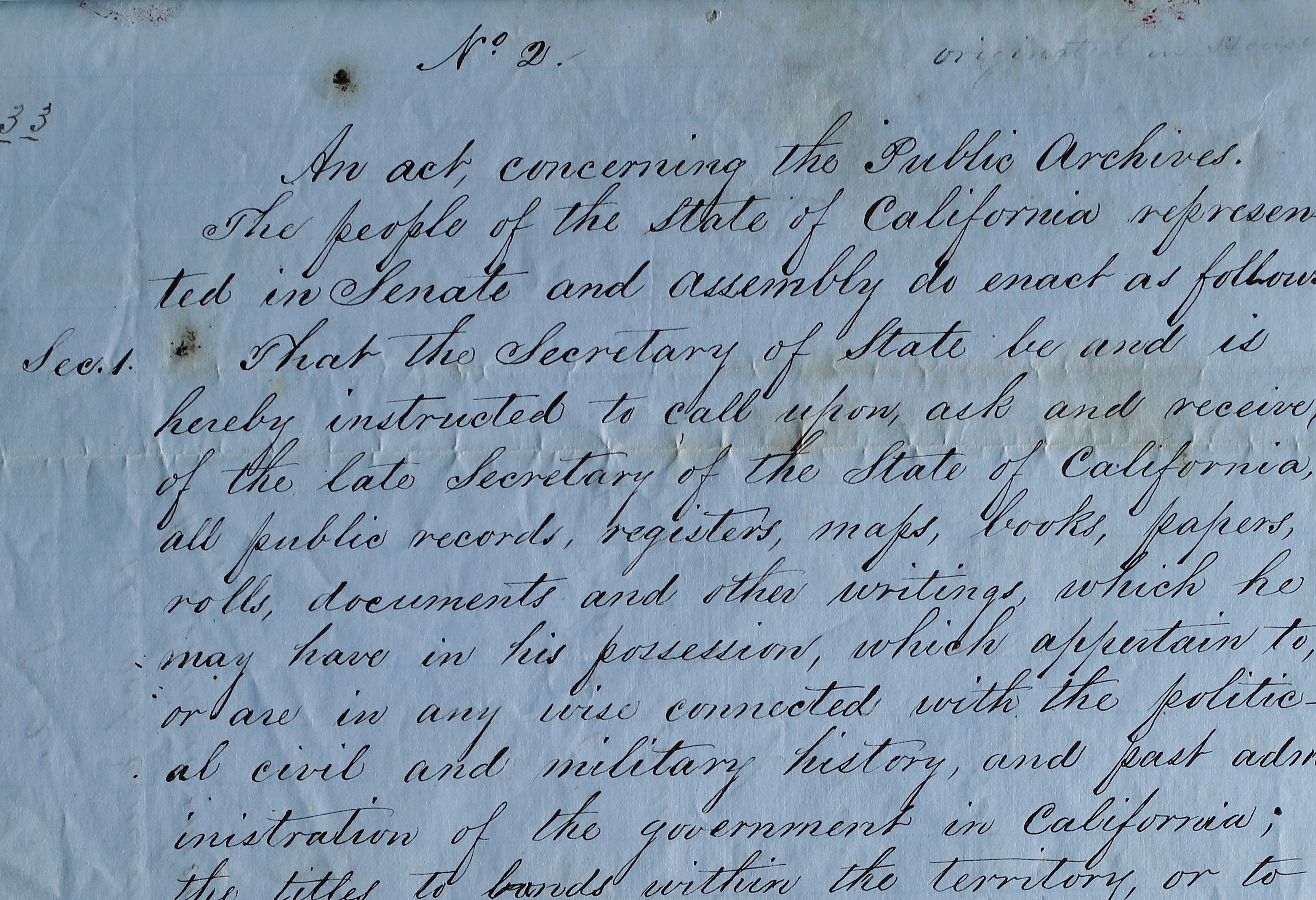 On January 5, 1850, nine months before gaining U.S. statehood, the California Legislature passed its first law: “An Act Concerning the Public Archives,” (Statutes of 1850, Chapter 1). The law created the state's Public Archives, one of the first permanent public archives in the nation ." [photo of Public Archives Act-handwritten and/or pdf]

Under this new law the Public Archives became a part of the Secretary of State's office to "classify, and safely keep, and preserve" all records that "were connected with the political, civil, and military history, and past administration of the Government in California." These records included registers, maps, books, papers, rolls, documents, and other writings, on subjects "which may be interesting, or valuable as references or authorities to the Government, or people of the State." ." [photo of Public Archives Act-handwritten and/or pdf]

Today, the California State Archives continues to collect, catalog, preserve, and provide access to the historic records of state government and some local governments. The Archives collection is primarily comprised of records from California state agencies, the governor's office, the state legislature, and the State Supreme Court and Courts of Appeal. The records are organized under the name of the agency or office that transferred the records to the Archives. The collections also include some private papers that have been donated to the Archives.

Each year hundreds of researchers contact and visit the California State Archives seeking documentation to support their historical investigation. Archivists provide reference services to help researchers identify collections that are most relevant to their area of interest and retrieve those records from a secure storage area for researchers to view in the Research Room.

Public education and outreach are also important elements of the State Archives' mission. In October of each year, the public can attend the Archives Month Open House, enjoy a behind–the–scenes tour of the facility, and learn more about the archival profession and other archival repositories in California. The Archives also offers monthly behind the scenes public tours.

The State Archives continually works to promote the development of the archival profession through the Western Archives Institute (co–sponsored by the Society of California Archivists) , and education through the Graduate Internship Program. Located one block south of the State Capitol, the State Archives is housed in the Secretary of State office complex. Completed in 1995, the 170,000 square foot building has six floors of environmentally controlled stacks, including a number of specialized vaults, which house the Archives' collections, as well as preservation, imaging, and processing labs.

The State Archives is home to original bills signed into law by the Governor and chaptered by the Secretary of State, original bill proposals from the State Senate and State Assembly, opinions of the State Supreme Court and Courts of Appeal, and bill files from legislators and legislative committees. Taken together, these records represent the legal foundation of state government and are frequently used by the courts, the legal community, state and local governments, and the public.

A summary of the Public Records Act can be found on the Attorney General's website.

California's Replevin Law  enables state and local government agencies to recover public records that are being held unlawfully and makes it illegal for private parties to possess state or local government records.