ICX is an accessible ballot marking device. The ballot marking capabilities allow a voter to vote using the accessible tactile interface (ATI), sip-n-puff, or paddle switches. The ICX has the audio capability to handle any of the ten languages required by the U.S. Department of Justice (English, Spanish, Chinese, Japanese, Tagalog, Korean, Vietnamese, Thai, Hindi, and Khmer). The ICX requires the voter to insert an activation card which is generated by a poll worker.

California Counties that use Dominion:

How to Vote on the ImageCast ICX(PDF)


How to Vote on ImageCast Evolution

On Election Day, once the voter credentials are verified, a poll worker will give the voter a paper ballot. In some jurisdictions, a secrecy folder may also be provided.

The voter will take the ballot to a designated marking station, where a marking pen will be provided. To vote, the voter fills in the oval next to their choice, using only the pen provided. When they are finished voting, the voter places their ballot in the secrecy folder, if provided.

The voter should wait until the ballot is successfully cast, in case the tabulator detects any non-typical voting scenarios. 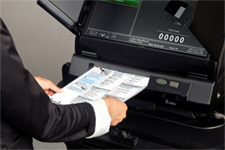 However, if the tabulator detects certain non-typical voting scenarios, a warning message will be displayed on the screen. 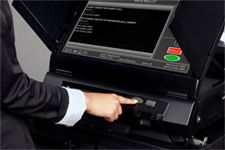 If the tabulator detects unclear marks, the ballot will be immediately returned and the screen will display an Ambiguous Mark message. The ballot must be corrected before it can be cast. 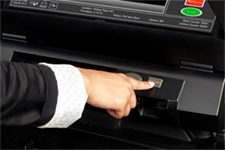 When the polls close at the end of Election Day, the results from the secure, encrypted memory cards of each ImageCast Evolution tabulator are uploaded to the central system in order to rapidly tally and report the results to the public and the media.

The accessible voting session uses a hand-held controller called an ATI (Audio Tactile Interface) that connects to the ImageCast Evolution. A set of headphones connects directly to the ATI controller. Following the audio voting process using the ATI controller, the integrated inkjet printer produces a marked paper ballot which serves as the official ballot record. Voters are able to review, verify and correct their selections prior to casting their ballot by audio and/or visual means. 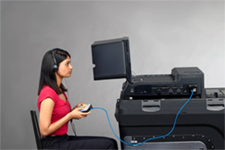 The display can be adjusted using the zoom and contrast buttons. There are three different zoom levels in order to provide an enlarged ballot for voters with visual impairments. Every voter conﬁgurable option is automatically reset to its default value with the initiation of each new voting session.

The contrast button allows the voter to display the screen image in high contrast (high contrast is a ﬁgure-to-ground ambient contrast ratio for text and informational graphics of at least 6:1).

The ATI is the handheld device that is used by a voter during an Accessible Voting Session to navigate through and make selections to their ballot. The ATI: 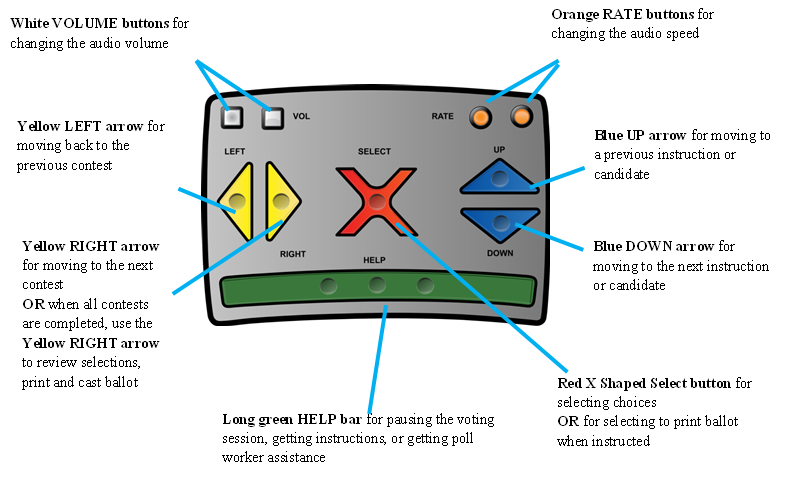