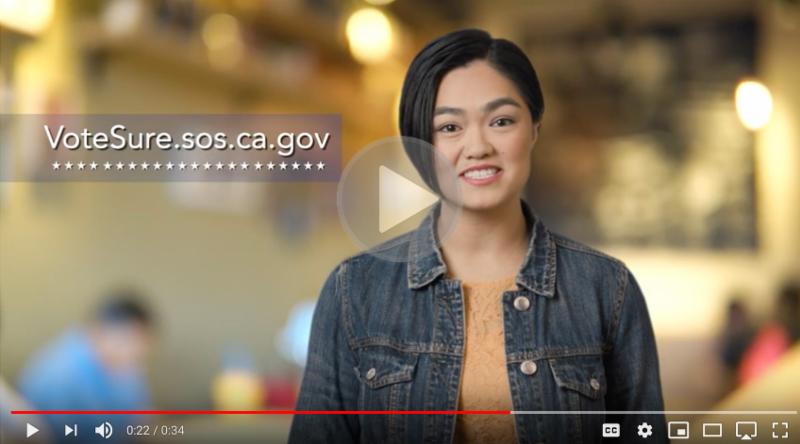 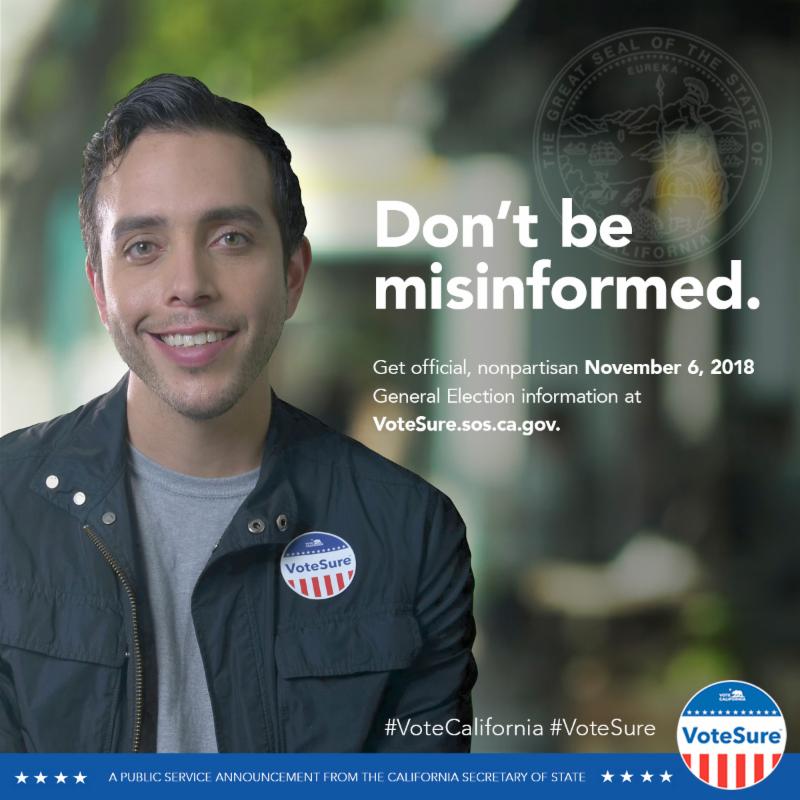 “Californians are paying attention to the November 6 General Election, but so are those seeking to interfere with our elections by spreading misinformation,” said Secretary of State Alex Padilla. "With our new VoteSure initiative, we are reminding California voters that for reliable, official, nonpartisan information about the November 6, 2018 General Election, they should go directly to the source: the Secretary of State's website or their local county elections office. Staying vigilant and being informed is how Californians can vote sure this election."

The VoteSure.sos.ca.gov portal includes links to help voters look up their voter registration status, find their polling place and early voting opportunities, and learn about their rights as voters.

"With the rollout of our newly beefed up elections cybersecurity and VoteSure public education campaign, California voters should vote with confidence this year knowing that those intentionally spreading misinformation can now be prosecuted criminally, and that threats are being countered 24/7 by the Secretary of State's office," said Senate Elections Chair Henry Stern (D-Canoga Park), who championed funding for the new campaign.

As part of the VoteSure™ initiative, voters who included an email address with their voter registration will receive email communications and resource information directly from the Secretary of State’s office. Voters can also report suspicious content on social media that may be spreading election misinformation. The VoteSure campaign will run through Election Day with paid advertisements on Twitter, Facebook and Instagram.

“The 2016 election ushered in a new era in which election misinformation is increasingly used as a tool to try to disenfranchise voters and undermine our democracy,” said Assemblymember Marc Berman (D-Palo Alto). "That's why it is crucial for California to continue to take the lead in countering these nefarious tactics. The efforts of Secretary Padilla and California's 58 county elections officials to ensure that voters receive accurate, nonpartisan information about California's election rules and procedures are critical in protecting the integrity of our elections."

Intelligence officials are unanimous in determining that foreign actors spread election misinformation ahead of the 2016 Presidential Election. In response, the California Legislature and Governor approved funding in the Budget Act of 2018 to address election misinformation in the FY18-19 budget. This included the creation of the Office of Election Cybersecurity and Enterprise Risk Management. A new cybersecurity website Cybersecurity.sos.ca.gov was created to inform the public about efforts being taken to protect elections.