On Friday, September 23, 2016, United States Facebook users age 18 and up began receiving a reminder to register to vote through a link appearing at the top of their News Feed.

The result was a major surge in online voter registration.

“Friday’s registration activity was the fourth highest in the four year history of California’s online voter registration site,” Secretary of State Padilla said. “Registering to vote is the first step to becoming an active voter. For many who may be new to the political process an invitation to register can be a powerful nudge to get involved. Facebook has demonstrated the power of social media to engage more people to register to vote, helping thousands take a big step to casting a ballot this November.”

“Going back to 2008, we’ve been reminding people on Facebook to vote on Election Day and directing them to information on where to vote. This is the natural next step. We want people to have a voice in the process, and getting registered means that there’s one less hurdle for them,” said Samidh Chakrabarti, Facebook’s Product Manager for civic engagement.

Before the Facebook reminder, there was an average of 9,307 completed registrations or updates of registration information per day in September on the Secretary of State’s online voter registration site.

October 24 is the deadline to register for the November 8, 2016 General Election.

The Facebook reminder post includes a link to take users to Vote.USA.gov—a federal site with voter registration resources. This site redirects California users to RegisterToVote.ca.gov via a pulldown menu. In addition to initiating their own voter registration process, people can let friends on Facebook know that they are registered to vote and encourage their friends to register too. 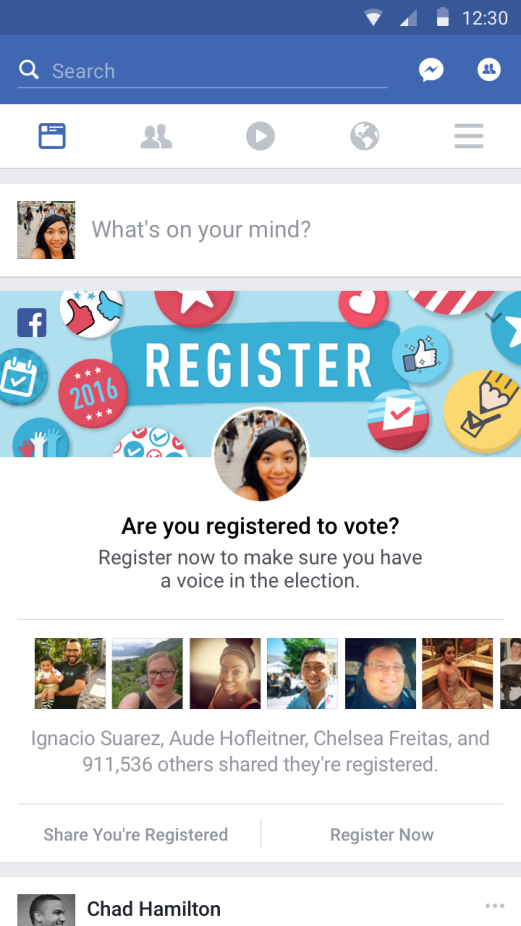