On Monday, May 16, 2016, Californians who logged into their Facebook accounts began receiving a reminder to register to vote through a link appearing at the top of their News Feed.

The results were stunning.

"By providing a platform for civic engagement and reminding people in California to vote, Facebook makes it easier for people to participate and have a real impact on the political process. When more people are engaged, public officials hear a wider range of views, leading to an open and healthy debate." -Katie Harbath, Director of Government and Politics at Facebook

"Californians have until the May 23 to register for the June 7 Primary Election," Secretary of State Alex Padilla said. "Whether you're registering for the first time or you just need to update your registration information, you can do it online at RegisterToVote.ca.gov”

May 23 is the deadline to register for the June 7, 2016 Presidential Primary Election.

“If you've moved, changed your name, or want to change your political party preference simply visit RegisterToVote.ca.gov by May 23," Padilla added.

The Facebook reminder post included a link to take users to Vote.USA.gov—a federal site with voter registration resources. This site redirects California users to RegisterToVote.ca.gov via a pulldown menu. 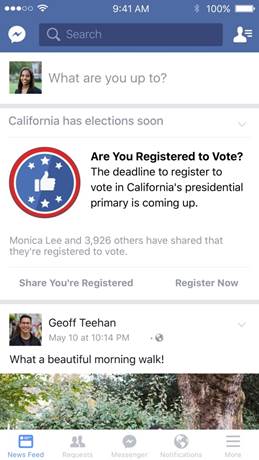 This reminder ran from May 16 through May 18, 2016, and went out to Facebook users in California who will be 18 or older on Election Day.