SACRAMENTO – Over 560,000 Californians have used the Secretary of State’s Online Voter Registration site to register to vote or update their registration information in the first three months of 2016.  This surge of registrations has been fueled by Californians ages 17-25, who accounted for over 36% of online registrations during this period. These numbers do not include traditional paper registrations. The next complete statewide report on registration will reflect statistics as of April 8, 2016, and will include registrations obtained both online and on paper.

“Online voter registration is empowering a new generation of Californians,” Secretary of State Alex Padilla said. “We are witnessing a wave of young Californians engaging in the democratic process. The timing says everything—they want to vote.”

“All eyes will be on California on June 7. It is vital that California voters cast a ballot to shape the future of our state and nation. The stakes could not be higher during this election season, and I encourage every eligible citizen to vote in the June 7 Presidential Primary Election,” Padilla added.

"This surge in online voter registration suggests that elections officials throughout our state should be preparing for a surge in turnout during the June 7 Presidential Primary Election," Padilla said.

“Online voter registration is quick, easy, smartphone friendly and available in 10 languages at RegisterToVote.ca.gov. If you’ve already registered, reach out to eligible friends and family about the importance of registering and voting in this year’s election,” Padilla said.

Secretary of State Padilla has made outreach to new voters a priority of his administration—addressing citizenship naturalization ceremonies, speaking to high school students, and discussing best practices for voter registration drives with college students across California.

17 year old citizens, who will be 18 or older by the next election, can register to vote. 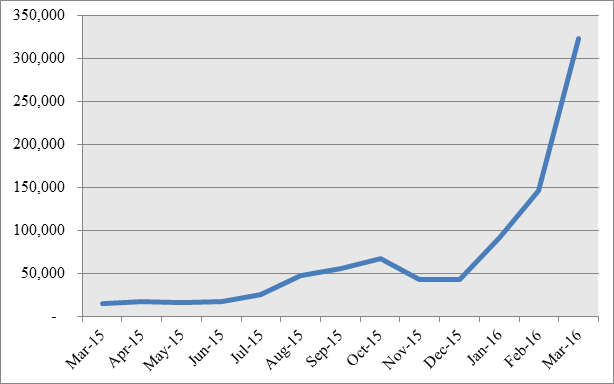